Toyota has introduced its latest electric vehicle, bz3, which is produced together with FAW and BYD for the Chinese market.

Every day, new model vehicles are included in the electric automotive market, which is growing day by day. One of them is the 2nd vehicle of Toyota’s bZ series, which was officially introduced in the past days – bZ3. Developed for the Chinese market together with Chinese local electric vehicle manufacturers BYD and FAW, the bZ3 is seen as a competitor to Tesla Model 3.

This compact electric sedan can reach a range of 600 km on a single charge, thanks to the BYD Blade lithium-ion LFP battery using lithium iron phosphate and the powertrain developed using Toyota’s most advanced electrification technologies.

Many features have been redesigned for this vehicle. Battery structure, cooling, control, and security monitoring systems are just a few of them. For example, the Japanese automaker says it uses state-of-the-art electrification technology, with experts to prevent battery degradation, with its goal of providing 90 percent capacity even after ten years of use.

bZ Series is Built on the e-TNGA platform of Toyota 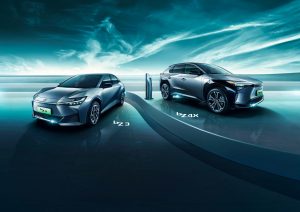 Dynamics is one of the vehicle’s most important features while it is being developed. Built on the e-TNGA platform, which is also used by the bZ4X SUV, the previous model of the bZ series, the bZ3 is said to provide a comfortable ride, low center of gravity, excellent handling balance, and responsive performance.

Much attention has been paid to the interior volume and width of the vehicle as well as the mechanical part. Toyota states that while developing the vehicle, they thought of it not only as a means of transportation but also as a space to spend time with family and friends. That’s why the interior of the vehicle also has very fine details. Toyota’s Digital Island system combines a large vertical center display with a tray-type console inside. In addition to wireless charging, smartphones, and multimedia, as well as air conditioning, music, and automatic trunk release are just a few of the interior features. Volume control is also part of the system. 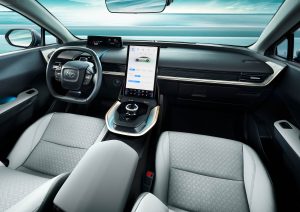 Like the bZ4X, the bZ3 has the hammerhead shark-like design format of the Toyota bZ series, but the sedan body style gives it much higher aerodynamic efficiency. Thanks to this and the use of air guides, air curtains, recessed door handles, aero-optimized wheels, and a shaped rear bumper to reduce air resistance, the Toyota bZ3 achieves a drag coefficient of 0.218.

The bZ3, which will be produced by FAW Toyota, is said to have a production and sales start before the end of this year and an estimated base price of around $28,000.