The largest charging networks in the US are ChargePoint, Tesla and Blink. Volta, EVgo, Electrify America and Shell Recharge are other big companies that provide charging services.

Every day, companies release another electric vehicle or announce plans to increase the electrification of their fleet. This leads to EVs becoming more prevalent in every part of the world. However, the biggest concern with EVs is the range limitation, which leads people to have doubts about finding charging stations on the roads. To overcome this obstacle, many companies invest in establishing charging networks and stations all over the world.

To understand the concerns and the solutions in the US, we have gathered the list of ‘Top 15 Charging Networks in the US.’ According to the U.S. Department of Energy, there are 53,899 EV charging stations and 143,577 charging ports (28,623 DC sockets and 114,954 Level 1/2 ports) in the country on January 2023. At the beginning of December 2022, the numbers were as follows: 48,538 EV stations and 125,392 charging ports (26,257 DC sockets and 99,135 Level 1/2 ports). The new data shows that the number of EV charging stations in 2 months has increased by %11 and of charging ports by %15. The largest charging networks are ChargePoint, Tesla and Blink. Volta, EVgo, Electrify America and Shell Recharge are other big companies that provide charging services. You can find the number of stations of companies and the number of AC and DC charging ports in the table below.

Largest EV Charging Networks in the US ChargePoint has the largest charging network in the US, yet relatively few of these are DC fast charging stations. Its stations mostly provide around 6.6kW of electricity per hour. This is the type of Level 2 charging that can be achieved through a 240V outlet or charging station at home. A vehicle can go around 25 miles when plugged into these chargers for an hour.

The business model of ChargePoint is different from the other charging networks. The company has stations at apartment complexes, hotels, stores, and other businesses. They can be seen even at public libraries or parks. The common characteristic of these locations is that people have several hours for their cars can recoup much of their charge.

The ChargePoint network has also DC fast chargers, but they aren’t as fast as others. There are some 125kW fast chargers in its stations, but most are capable of 24kW to 62kW. To find the fast chargers using the app or website, Level 2 chargers need to be filtered out since they make up most of the ChargePoint chargers. 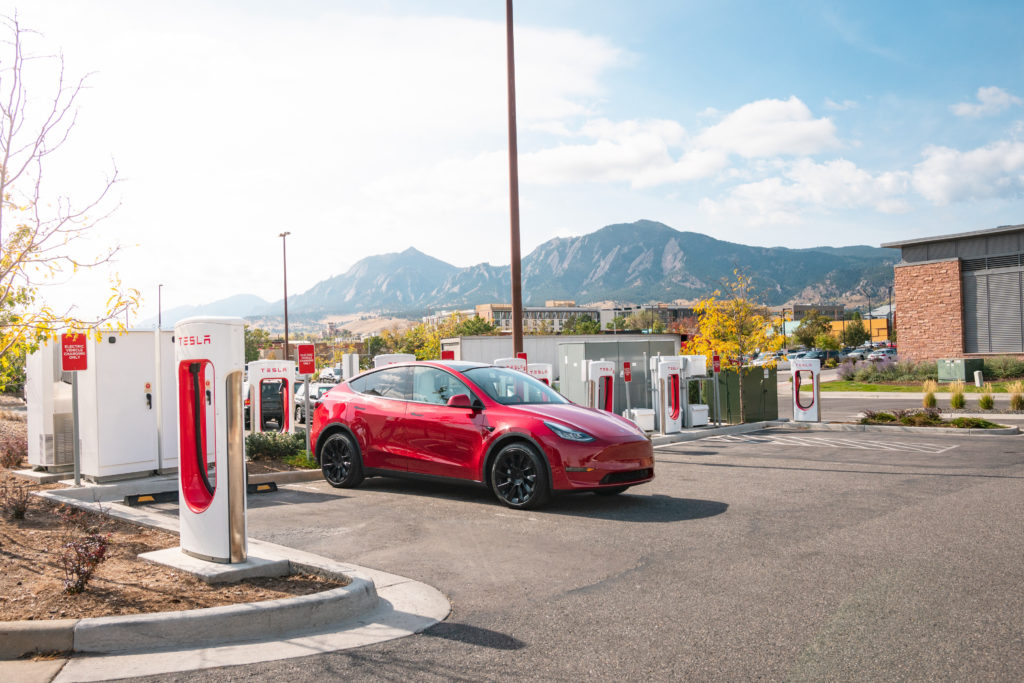 Tesla’s Supercharger network is the second largest in the country and its stations are close to each other compared to Electrify America. However, there is a downside: Tesla’s network is currently only available to Tesla vehicles. Yet, since Tesla sells the most EVs, a substantial proportion of electric cars on the road can benefit from these Supercharger stations.

The Supercharger network has the smoothest charging experience for its customer. Since the company already knows its customers’ payment information, people with Tesla vehicles simply plug the charger into their car and the charging begins automatically. In this sense, the charging is smoother than using a gas pump.

Tesla Superchargers have a lower max speed compared to some other charging networks. But this is just a theoretical limit for now. The fastest Superchargers can technically reach 300kW, but they are capped at 250kW for the time being. Since this is not a big downside because its speed is already more than enough for many cars.

In the meantime, Tesla is conducting some trials about opening its Supercharger network to non-Tesla vehicles. If this happens, that would be a big step toward a world where any EV capable of fast charging can charge at any DC fast charging station.

Tesla has another new type of charging station: The Destination Charger, which is being rolled out in select areas of the United States. The charging stations allow Tesla owners to charge their cars at destinations, rather than having to charge at a Supercharger. Those chargers are not owned or maintained by Tesla. Instead, they’re owned and maintained by the owners of the premises on which they’re located. Additionally, they’re located in areas such as hotel car parks. Blink is another large charging network mostly supplying Level 2 chargers. Its stations can be found at hotels, businesses, and the like. Acquiring SemaConnect in June 2022 substantially increased Blink’s footprint across the country.

Like ChargePoint, a few DC fast chargers are available on the Blink network. But the options in its stations are very few. There aren’t that many Blink fast chargers, and those that do exist provide around 50kW of power. Also, it’s less like to come across Blink chargers on the roads but if its app is installed on your phone, you can find one near you. Volta Inc. is the 4th largest charging network and media company. Volta’s difference has always been that ad sales are centered on its business model. The company’s spokesman recently said its network currently includes 5,400 screens and 2,920 individual charging ports across 28 U.S. states and territories.

Volta also signed an agreement to plant stations in partnership with supermarket conglomerate Kroger Co. and the city of Hoboken, N.J. Furthermore, Volta draws first-party data from its mobile app and combines that with retail partners’ customer-loyalty databases. Sensors at Volta stations can also target consumers by their vehicle model.

The company primarily makes and installs Level 2 stations, which let owners charge their vehicles while parked for extended periods, though they also operate a small number of far faster direct-current stations.

Shell will acquire Volta Inc. at a price of $169 million on January 2023. According to the acquisition announcement, Shell would provide Volta with loans to support the company until the planned acquisition is completed in the first half of 2023. 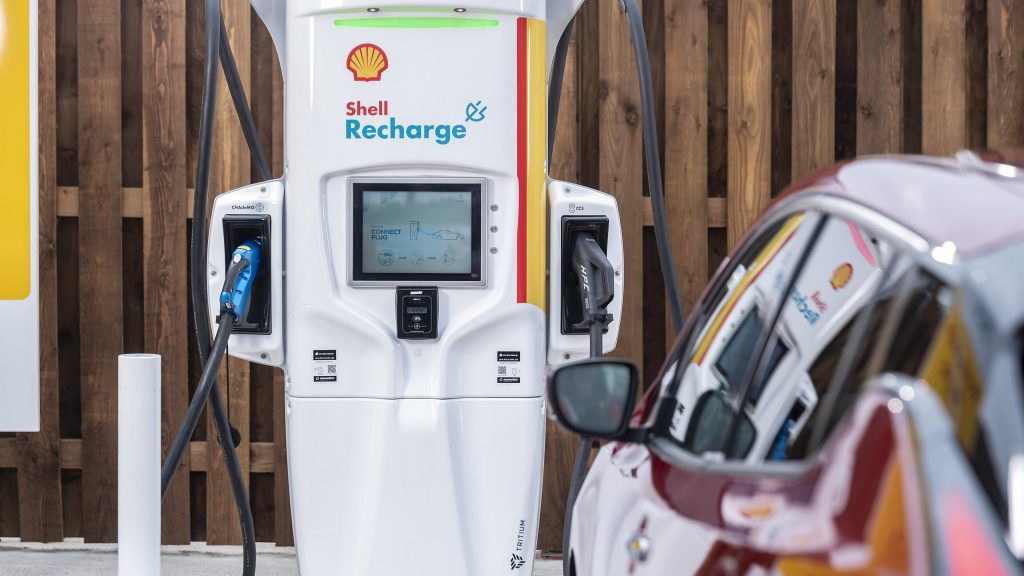 The speed of EVgo stations is around 50kW. This means that one vehicle can be charged up to 80% in one hour. That’s a long time for a road trip, but it’s a reasonable charging time while shopping or dining at a restaurant.

EVgo has also an app that offers the option of swiping a credit card. EVgo is the friendliest network for cars that use a CHAdeMO port. Each EVgo station has one CCS and one CHAdeMO plug. 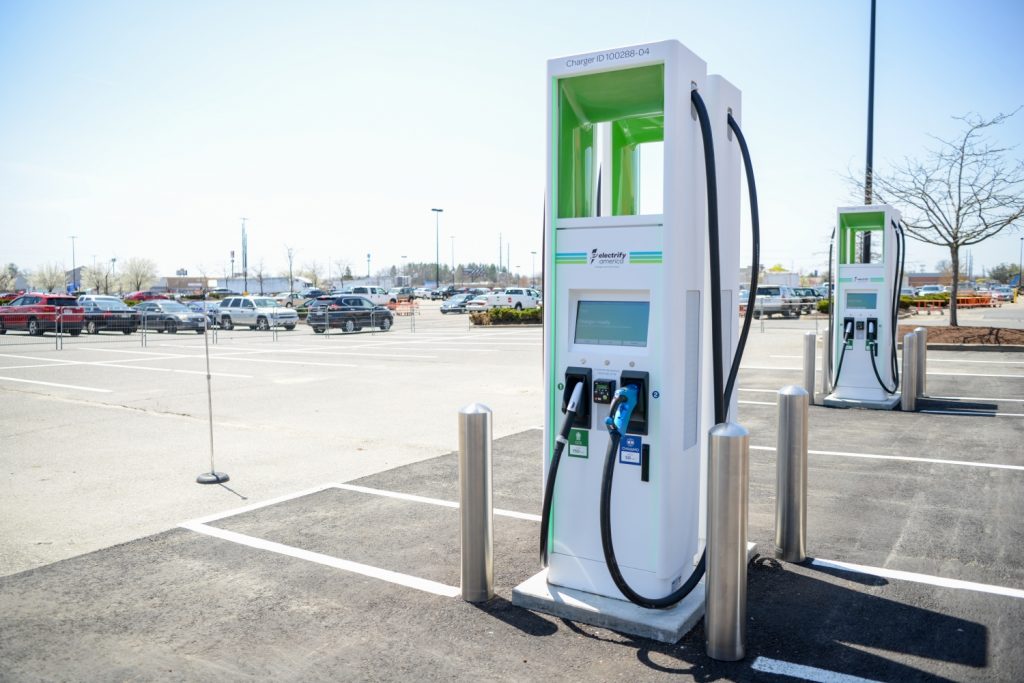 Electrify America is currently one of the largest DC fast-charger networks in the United States. The company has around 800 charging stations with about 3,500 individual EV chargers. The company is planning to expand in the United States and Canada by 2026, growing to approximately 10,000 chargers across 1,800 different Electrify America stations.

Unlike many other competitors, EA has kept a keen focus on delivering as much power as possible, offering a minimum of 150 kW, but power as high as 350 kW. Such energy demands can strain the local electrical grid in certain areas, especially when peak demand is at its highest.

Its charging units are open to all EVs with a CCS charging connection (the industry standard). The few vehicles with CHAdeMO port like the Nissan Leaf can also use the stations of Electrify America but there is only one port in each station. Also, Tesla vehicles can connect to Electrify America with a CSS connector.

The stations of Electrify America are mostly located near Interstate exits and often in the parking lots of partnering stores such as Walmart or Sheetz. It has an app to start and pay for charging or swipe a credit card instead.