Tesla owners can now watch TikTok in their car

There are some very interesting UI changes and new games in this OTA update waiting for Tesla owners to dig into, one of which is the ability to watch TikTok videos from the touchscreen.

Tesla has begun rolling out the big holiday update which brings cool new features and some entertainment stuff. The update some fans referred to as “V11 UI update” is indeed named as ‘Software Version 11.0’ by the automaker, according to Teslascope. There are some very interesting UI changes and new games in this OTA update waiting for Tesla owners to dig into, one of which is the ability to watch TikTok videos from the touchscreen.

Texas-based EV maker previously made the Chinese version of the TikTok, called DouYin, available for Tesla owners in China. With the new update, other Tesla drivers can also access the popular social media app by simply taping the Theater icon from the bottom bar and selecting TikTok while their car is in park. 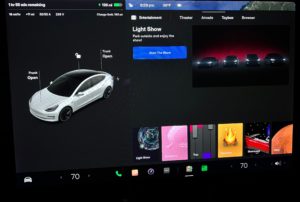 In the new user interface, Tesla drivers can customize the infotainment touchscreen of their car even more by dragging and dropping their favorite apps to any position along the bottom menu bar. The menu bar is also customizable, hold any icon and drag to reorder.

The main display of the car has been simplified to just focus on navigation, media, and the primary controls. Because of this simplification process, some controls are hidden further. For example, the vehicle icon at the bottom left of the screen is now housing the charging, windshield wipers, Bluetooth, Wi-Fi, and Sentry Mode settings. You don’t have to reach across your screen to find these controls, they can be accessed via the vehicle icon.

This update allows drivers to see a live camera feed of their blind spot whenever they activate the turn signal. It was not automated before. That was one of the most anticipated safety features by the Tesla community. To enable, go to Controls, then Autopilot, and tap the Automatic Blind Spot Camera.

You can now edit Waypoints

Last month, Tesla added a new feature to its in-car navigation system that allows drivers to add waypoints. The latest OTA also updated this feature to include waypoint reordering, adding multiple destinations to the route with updated arrival times, etc.

Tesla owners can now manually turn on the Dark Mode. Just tap Controls > Display > Appearance and select the Dark. This feature turns most of the UI into dark colors. 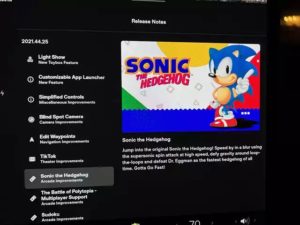 Tesla usually keeps some of the fun features for their holiday update. This year’s fun features are the newly added games: Sonic The Hedgehog and Sudoku. And also, drivers can now play The Battle of Polytopia with friends using the new multiplayer mode. If you have lots of fancy friends that own a Tesla, you can enjoy this game with them.

Tesla vehicles have a ‘Toybox’ where all the fun features are bundled. This year’s holiday update includes a new easter egg for almost every Tesla owner. As you can see above, there is a new light show feature which is basically a colorful light effect performed by the LED headlights.