As early as 2024, the long-awaited Ram 1500 Revolution battery-electric car will go into production.

Ram has refrained from joining the electric-truck race as Chevy is preparing to introduce the Silverado EV and Ford is busy manufacturing several F-150 Lightnings. However, Ram recently showed the 1500 Revolution BEV model at the 2023 Consumer Electronics Show(CES). The manufacturer introduced an electric 1500 pickup in 2024 and offered the first clues as to the brand’s potential creative path.

With a swept-back windscreen and a lengthened wheelbase, the design has a modern appearance. Ram describes the lighted “RAM” insignia between the LED headlights as having a “tuning fork” shape. It dominates the blacked-out front end as well. Under the sturdy skid plate in the bumper are tow hooks.LEDs also make up the taillights and Ram emblem on the tailgate.

A motorized frunk, a charging port, flush door handles, side steps, and a rear step are all standard on the Revolution. And we anticipate that most of these amenities will be available, at least on more expensive models. It is also possible to lengthen the tailgate in order to increase the bed by a couple of extra feet and support bigger loads. 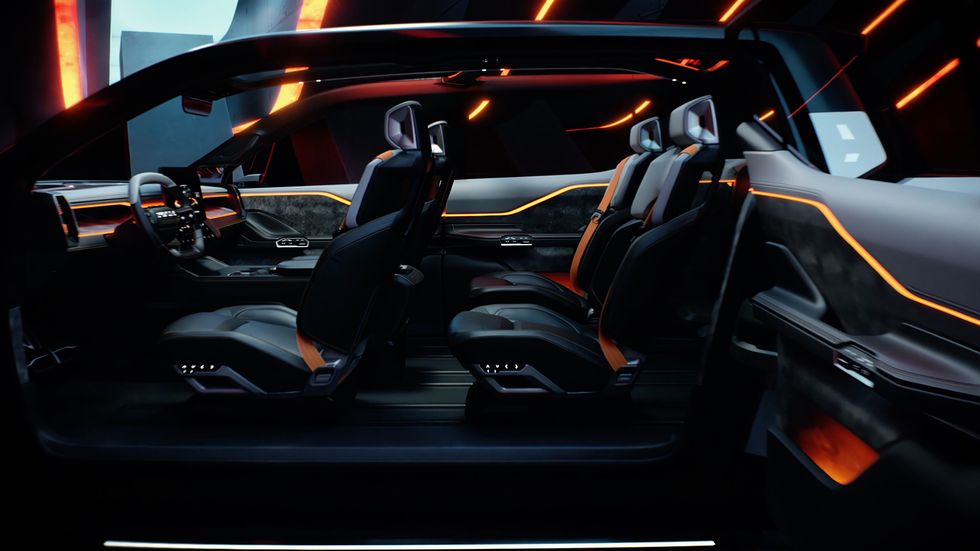 The design also has coach doors, allowing Ram to eliminate the B-pillar to facilitate entrance and exit by opening opposite the front doors. These fancy doors are probably not going to be used in fact. But the lightweight, 3D-printed cameras that take the place of the side-view mirrors may if U.S. rules change. The wheels of the 1500 Revolution, similar to those on Rolls-Royces, have light-up center caps. They are 24 inches in diameter and 35 inches in diameter, respectively.

Compared to the present gas-powered truck, the cabin is four inches larger and has “Ram Track,” a floor-mounted rail connection system that enables various interior designs. The rails, also present in the frunk and bed, serve as tie-downs for freight. The compact seats, which include speakers, grab grips, and integrated seatbelts, may be removed or folded flat. 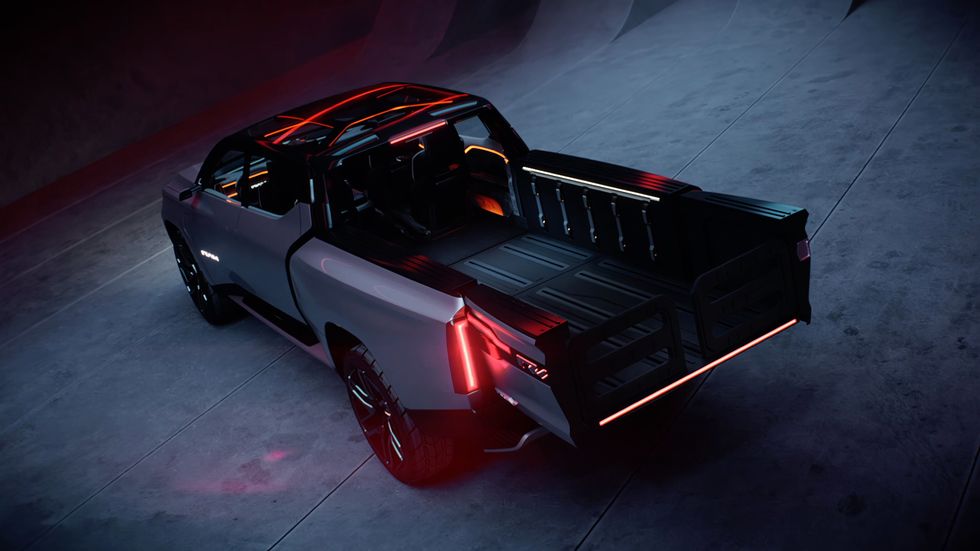 It is also possible to add third-row jump seats to the two rows of seating to boost capacity. According to Ram, these seats are installed in the motorized mid-gate and may be linked to the bed, echoing the Subaru Brat from the late 1970s. Sadly, Ram didn’t share any images of the jump seats. However, the mid-gate is also believed to have a pass-through that reaches all the way to the frunk. This feature is first seen on the Bollinger B2 and is capable of accommodating things up to 18 feet long.

You may remove it to use it as a The armrest may be converted into a desk in keeping with the notion of cabin modification. Also available is the option to remove the center console to increase the interior room. On the dashboard, orange ambient lighting flows behind a dual display configuration with a 28-inch touchscreen, revealing the “tuning fork” appearance once more. The upper screen appears to be able to slide on the Ram Track system. There are three different ways to modify the bottom screen. You may remove it and use it as a tablet. 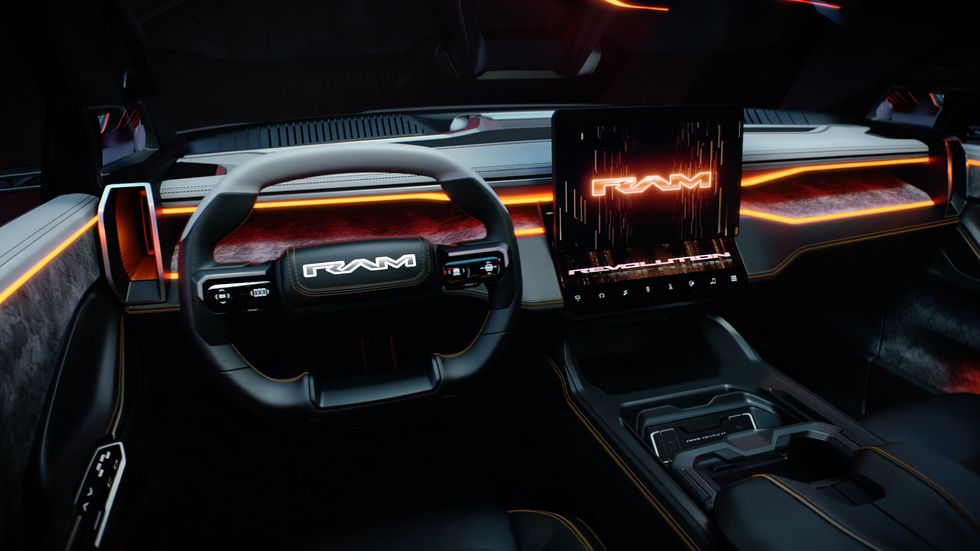 High-end technology abounds within the cabin of this electric truck prototype. It includes a 360-degree camera system, an AI-powered voice assistant, and augmented reality in the head-up display. The octagonal steering wheel features small screens. On the glass roof, there are electrochromic panels with individually configurable opacity. Additionally, there are eco-friendly materials throughout the pickup’s interior. For instance, a floor made of recycled rubber and cork, and leather manufactured from apple industry waste.