There are different kinds of lithium-ion battery cells used inside electric vehicle batteries. We summarized important details about LFP, NMC cathodes, and different cell shapes such as cylindrical, prismatic, and pouch.

Thirty years back, when the lithium-ion battery was first commercialized, it changed dozens of industries and started its journey to become the ultimate energy storage solution. Today, we are familiar with this invention, thanks to its popularity among mobile devices such as smartphones, tablets, and laptops. But this article will mostly focus on lithium batteries used in electric vehicles.

Some say lithium-ion battery was invented because the 70s’ petrol crisis triggered scientists to seek an alternative to gasoline and diesel. Some say it was the damned transistors that paved the way for portable electronics and, as a result, caused an urgent need for both flexible, light-weight, and energy-dense electrical energy storage solutions. Regardless of what exactly caused the invention of lithium-ion batteries, we can clearly say that it is definitely in the center of human life and will be an important part of industries such as automotive, electronics, renewable energy, etc.

In short, a lithium-ion battery is an electrical energy storage product that uses lithium ions to store electrical energy. The whole energy storage unit is called the battery, or battery pack. Its smallest part that can hold energy itself is called the battery cell. The desired number of cells weld together to create a battery pack. Fundamentally lithium battery cells consist of four main parts; a negative electrode (anode), a positive electrode (cathode), an electrolyte, and a separator. An electric vehicle battery pack can hold thousands of lithium-ion battery cells and weigh around 650-1,800 lbs (~300-800 kg). EV batteries can be filled with cells in different kinds and shapes. This article will explore the lithium-ion battery cells used inside electric vehicles.

There are mainly three types of lithium-ion battery cells used inside EV battery pack; cylindrical cell, prismatic cell, and pouch cell. The cylindrical type of cells is rolled up battery materials inside a hollow cylinder metal casing. In a prismatic cell, battery materials fold multiple times and are put inside a rectangular-shaped casing. Lastly, pouch-design battery cells are the most flexible ones. Pouch cells consist of cut-out battery material sheets layered on top of the desired number of identical sheets.

Tesla is the manufacturer of the world’s first electric vehicle equipped with a lithium-ion battery pack. Texas-based automaker mainly relies on cylindrical cells, but it recently started to use prismatic units when Chinese-made Model 3 and Ys with CATL-made LFP batteries were launched. Tesla didn’t have any other choice but to use cylindrical cells back in 2007. After the huge developments in the li-ion battery industry, prismatic and pouch cells have become alternatives to cylindrical cells both in production capacity, manufacturing costs, and energy density.

Pouch-design is the third most popular cell type among electric vehicles. Pouch cells are frequently used inside mobile devices such as smartphones, and IoT solutions, due to their flexible structure and higher energy density. As of today, Farasis is the largest pouch cell manufacturer in the EV world. The Chinese firm has its proprietary pouch cell design and cathode, anode formula to cope with the disadvantages of this cell form. Turkish EV-maker Togg, Geely, and Mercedes-Benz are some of its high-tier customers from the automotive industry.

Three kinds of cathodes dominate the EV battery market. These are NMC (Nickel-manganese-cobalt), LFP (Lithium-iron-phosphate), and NCA (Nickel-cobalt-aluminum). Lithium-ion batteries have been widely available long before the first EV with a li-ion battery entered the market. But lithium-ion or lithium-polymer batteries used in smartphones, computers, and other electronics were not suitable for the needs of a fully-electric vehicle. A vehicle should be reliable in a variety of metrics such as power delivery, battery lifetime, and charging speed. Thanks to advancements in the field of cathode materials, the electric vehicle we know today can be built and sold all over the world. New/improved chemistries made possible a battery that can hold enough energy to give an EV hundreds of miles of range. This new battery is also lighter and much cheaper than those used in electronics a decade ago. In this part we will briefly summarize those three cathode materials that make the EV dream true.

First of which is NMC. It was developed and patented by Argonne National Laboratory in the United States. NMC is a high-nickel cathode active material, which also includes a small portion of manganese and cobalt. NMC is the only commercialized cathode solution that can reach up to 300 Wh/kg energy density levels. But being the most successful alternative, it is also one of the most expensive ones. Due to the price hikes in materials needed for its formula, NMC’s rivals have been gaining ground in the global market in the last couple of years. Its biggest rival is called LFP, and it is already earned its way into millions of Chinese electric vehicles.

LFP is a cheaper alternative to NMC. It can be produced only by using low-cost abundant elements such as iron and phosphor. An analysis published in March 2022 confirmed that LFP’s market share reached 20 percent. China is the biggest producer of these cells with more than 95% market dominance. Unlike NMC, due to its nature, LFP cells are not prone to explosion, fire caused by external abuse, accidents, and heat. That being said, LFP is far safer battery cells to be used in vehicles than NMC.

LFP is the sole option for someone looking for a battery that costs less than $100 per kWh. LFP is 20 to 40 percent cheaper than NMC cells, but NMC is up to 80 percent more energy-dense than LFP. A battery cell with an NMC cathode has a nominal voltage of 3.7V, and the energy density range is between 150 to 300 Wh/kg. On the other hand, LFP is at 3.0-3.2V nominal voltage, and its energy density range is roughly 90-160 Wh/kg.

LFP also has some good advantages against its rival NMC cells. For instance, EV batteries with LFP cells can safely be charged to 100%, as automakers such as Tesla highly recommend this, unlike NMC batteries. LFP is also thermally stable and doesn’t cause any explosion when the thermal runaway occurs. LFP’s lifecycle is almost 100 percent longer than NMC cells. Last but not least, LFP cells can be designed bigger, and wider, thanks to their thermal stability, thus overall volumetric energy density increases significantly. 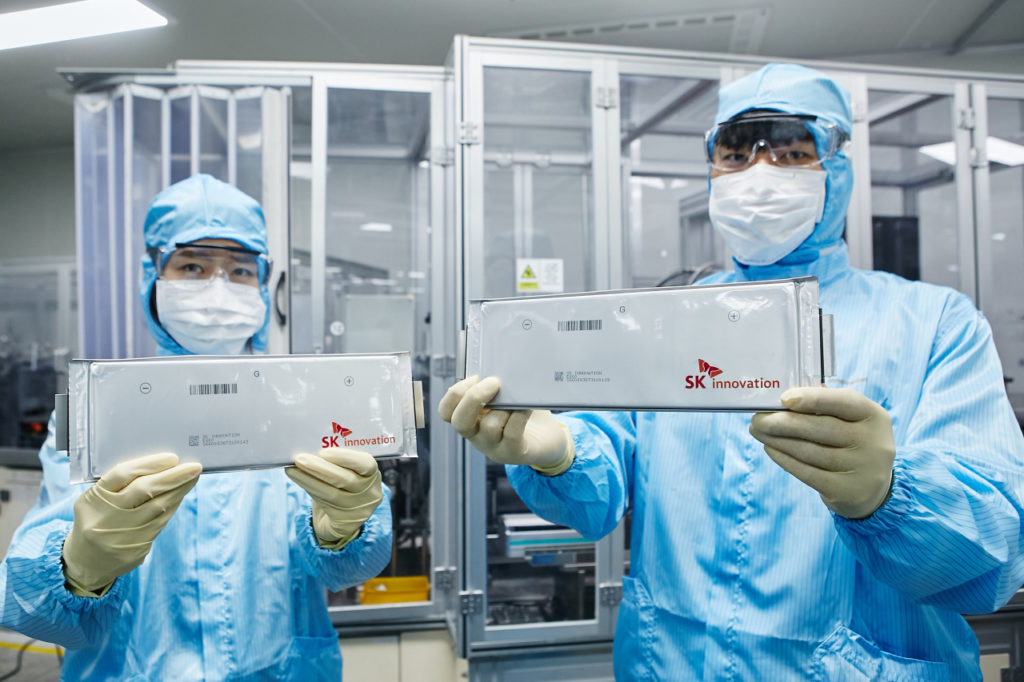 In this section, we listed some of the most important EV battery manufacturers and cell types they manufacture, to better understand the battery industry’s cell type preferences. CATL and BYD are the most prominent LFP producers, as those two hold almost 90% of that segment of the market in their hands. LFP will become more popular in the coming months. Korean firms LG Chem and Samsung SDI will also enter LFP production before the year ends.

Regarding the list, Farasis is the sole contender for pouch-design EV battery cells. And Panasonic is also the only one that insists on not using manganese inside its NCA cells. Japanese firm only includes aluminum as the stabilizer for the high-nickel cathodes, unlike NMC producers that use both manganese and cobalt for the same purpose.

You can take a look at this fantastic video that The Limiting Factor explains how lithium-ion batteries work.

Some of the sources you can use for further research: